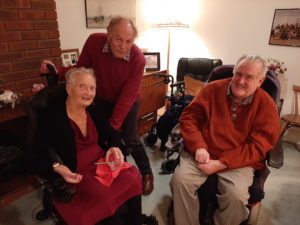 It is with regret that I have to report that Beryl Slater passed away on Monday.  Beryl was the Founder Member of the MS Centre in 1984.  She was Honorary Treasurer until 1990 when the Centre became a Limited Company and has remained a Trustee and Member of the Management Committee.   Beryl passed away peacefully at home on 6th January, it would of been her 91st birthday in on 11th February.  The photo attached was taken in December when Clive (former Chair), Dave and Sue had a lovely afternoon tea with Beryl at her home in Didcot.  There is a sympathy card on the table at the centre for people to sign.  Funeral arrangements are not known yet.
Beryl was a real personality and always had the Centre’s best interests at heart.  She will be sorely missed, especially by Sue.  The Centre would not be here without her.   Very sad news.