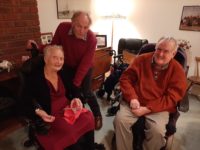 It is with regret that I have to report that Beryl Slater passed away on Monday.  Beryl was the Founder Member of the MS Centre in 1984.  She was Honorary Treasurer until 1990 when the Centre became a Limited Company and has remained a Trustee and Member of the Management Committee.   Beryl passed away peacefully at home on 6th January, it would of been her 91st birthday in on 11th February.  The photo attached was taken in December when Clive (former Chair), Dave and Sue had a lovely afternoon tea with Beryl at her home in Didcot.  There is a sympathy card on the table at the centre for people to sign.  Funeral arrangements are not known yet.
Beryl was a real personality and always had the Centre’s best interests at heart.  She will be sorely missed, especially by Sue.  The Centre would not be here without her.   Very sad news.

Why not join the 100 club when you renew your 2020 membership.  Please ask for details.  Thank you to all those currently in the 100 club.

Source BBC: One in two people who appealed in court against a decision to deny them disability benefits were successful, analysis of five years of data shows.

Ann Barker, who has bipolar disorder, said she was tempted to give up, but had twice fought a decision at tribunal and won.

The government said only around 5% of disability decisions were overturned.

Benefits assessments are carried out on behalf of the Department for Work and Pensions (DWP) by the private contractors Capita, the Independent Assessment Services (formerly called Atos) and Maximus.

In 2018, the Commons Work and Pensions Committee said failings in disability benefits assessments had led to a “pervasive lack of trust” in the system. It said ministers should consider taking the process back in-house.  Read on.

The projects include research on MS progression, and studies exploring new technologies to manage MS symptoms.  Read on.

Please DO NOT cancel appointments by Email.  Please telephone the centre and if no-one is in leave a message.  If Sue is not in emails are not checked and Sue is only part-time so are they are not checked everyday.  If an appointment is cancelled by email and a message has not been left on the phone a donation for that appointment will be requested.

Chris has let me know that Sue’s funeral will take place on Wednesday 11th at mid-day, Oxford Crem and after at Hawkwell House, Ifley.  Family flowers only, donations to the Centre.

Thank you to Nick Mellish for coming over from Oxford and;

a) reading my blog!

b) donating a lovely lightweight wheelchair for use in the gym

Dave Webb and Sue had a lovely afternoon tea with Beryl Slater, our founder and Clive Arup, past Chair, along with Jill Goodall.   It was so lovely to see them all again.

Monday 6th January – back to normal